The Internet isn’t hurting communication and deconstructing social ties. In fact, two authors and researchers argue that the Internet is enhancing them. 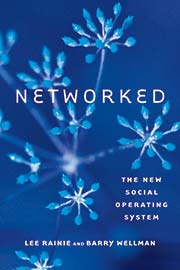 Not surprisingly, Networked authors Lee Rainie and Barry Wellman suggest that the Internet, social networking and mobile devices – the underlying triumvirate that underlies what they call the Triple Revolution – have enhanced our ability to connect with people.

The book starts off with an anecdote, for example, about a woman (Trudy) who had hit her head on a rock, resulting in surgeons needing to remove a third of her skull in order to let her brain heal and remove the blood. Peter sent photos of his hospitalized wife to a few people. “Within 36 hours,” the authors write, “nearly 150 people across North America had sent emails, as friends forwarded news about Trudy to others.” One recipient of a forwarded email requested financial help from others on the couple’s behalf. People they didn’t even know began to send checks. By sending just a few pictures, the news of Trudy’s emergency snowballed in the form of aid money and undoubtedly emotional support among other things, I’m sure.

One of my favorite quotes from the authors was on the first page of the preface. “Despite all the attention paid to new gadgets, technology does not determine human behavior; humans determine how technologies are used.”

Time and again throughout Networked, Lee and Rainie demonstrated this through the use of Pew statistics and both hypothetical and real anecdotes. Ninety-two percent of online adults use search engines to find information, I mentioned in a blog on Power Searching with Google. The Egyptian uprisings were largely conducted using mobile devices that were connected to the Internet. The entire midsection of the book hones in on how relationships, families, work, creators, and even information are enhanced by networks.

One of the more striking examples the authors gave was family. “No family is an island, and no house is a castle.” ICTs – information communication technologies – help family members stay connected with themselves and others. “The result is that ICTs…have paradoxically provided household members with the ability to go their separate ways while at the same time keeping them more connected. Families have less face time, but more connected time, using mobile phones and the Internet.”

The biggest negative of the book, in my opinion, should have been expected. There were points where I felt like I was swimming in numbers. Some came rapid fire. Others came with anecdotes. I understand the need for these numbers given this has a tight connection to the Pew Research Center, and they’re interesting in and of themselves. But they got a little dry in some areas.

Do yourself a favor and pick up this book. If not for the authors’ thesis on communication in the 21st century, then at least for their rendition of how the first mobile telephone call allegedly took place on April 3, 1973, between a Bell and a Motorola engineer.