Episode 08 – Jim Price: Karate Is My Way of Life

“Karate is a way of life, and it has been for me,” says Jim Price. “It’ll always be that way until the day I die.”

Mr. Jim Price is a black belt instructor with more than 40 years of experience in the martial arts, having trained since he was 20. He teaches Mr. Matthew Schell, who I podcasted with a few months ago. 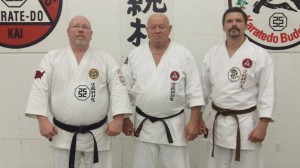 First impressions of karate in 1974:

“What always impressed me was I couldn’t get over the power and strength the teacher had, and the control. It just surprised me.”

Mr. Price relays a story of being in a horse stance – kiba dachi – and his instructor kicked him out of nowhere. The drill-sear

“It was nothing to go home (from tournaments) with blood on your uniform. You made contact.”

“Some of the teaching, I really agreed with. But a lot of it I didn’t.” He talks about teachers who instructed their students to lay flat on the ground so that the could jump on them. The students, then, would need to kiai to demonstrate tough stomachs. “That’s the first time I wound up getting two cracked ribs.”

“That’s what it’s really about.” He says one training method is to hang a weight from a string with chalk on the string. If you touch the line and flick the chalk powder off the string, Mr. Price says you demonstrate a lack of control.

Why switching from Shuri-ryu to Matsumura Seito Shorin-ryu was difficult:

“We were brainwashed” into thinking Shuri-ryu was the only true way in karate. “They didn’t want you questioning things in the Shuri-ryu system.”

“I fought it for about a year,” he says. “I really did care about the Shuri-ryu system.”

Mr. Price relays a story about performing a Shuri-ryu kata – Go Pei Sho (one of my favorites!) – at a tournament without knowing Mr. Koeppel was watching. “It really bothered me a lot … it was almost like I hurt my teacher’s feelings.”

Embarrassed by performing a Shuri-ryu kata as a Matsumura practitioner, Mr. Price spent a year and a half honing his forms and competing all around the tournament circuit.

Mr. Koeppel asked why he was spending so much time practicing for competition.

“I want people to know what we’re all about,” he told his teacher. They’d see many other styles, but “they don’t see Matsumura Seito.”

On the importance of getting younger people in leadership positions at organizations and tournaments:

“It seems like nowadays people are more around my age and into the 70s. Honestly, we need to get younger people involved … we’re not going to be around forever, and someone’s going to have to step in.”

On why Mr. Koeppel is a great martial arts instructor:

“When he’s teaching us stuff, he’ll teach us so much. But he wants us to branch out there and think about what we’re really doing, come up with our interpretation and talk to him about it. He guides us on that right path.”

“He’ll be the only teacher I’ll ever have,” he says. “I’ll never have another.”