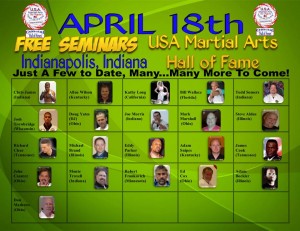 I think it’s super cool that I’m on the same flyer with a bunch of people whose seminars I’ve been to in the past, people I consider my friends, as well as my Chinese martial arts instructor, Steve Aldus, and freakin’ Superfoot Bill Wallace.

Now, onto this week’s roundup…

In what I assume is the complete anthology of martial arts in sitcoms, Sarah Kurchak of FIGHTLAND has pulled together clips and GIFs dating all the way back to 1996. I think my favorite clip from it right now is a clip from what I consider a classic episode of “It’s Always Sunny in Philadelphia,” in which Charlie trains for an underground fight by hawking Sweet Dee’s steroids mixing them with amphetamines. The best quote of the episode, though, goes to Dee herself: “I will eat your babies, bitch!”

When robot overlords take over the world, I’d hoped we’d be able to outsmart them by, I dunno, kicking them or something. Too bad, according to NPR. This four-legged, 160-pound robot can take a pretty solid kick from an adult male without tumbling over. I have to wonder what kind of cool fight science we can learn from a machine that can take a kick.

Kim Aldus is hosting a women’s self-defense seminar on March 1 in Morton. She is the real deal. Other women in this area are claiming they’re teaching women’s self-defense, but nobody has the credentials that Mrs. Aldus does – a black belt in at least three different styles, multiple-time USA Martial Arts Hall of Fame inductee, and is the only women’s self-defense instructor I know that brings an attorney in to tell you about Illinois law.

Plato, as in the Greek philosopher, was a martial artist – a wrestler, specifically. The article at Psychology Today discusses the relationship between martial arts and the philosophies they teach:

Learning to fight (and not to fight) can be excellent for Plato’s “strength and health” but can also develop the virtues that philosophers, east and west, have defended. The martial arts have also matured within rich philosophical traditions, and illuminate the to-and-fro between ideas and practice and between cultures over the centuries. And finally, the martial arts can challenge scholars with puzzles in ethics, aesthetics, and philosophy of mind.

I got a glimpse of krav maga last Saturday, thanks to Mr. Kelly O’Keefe. I hadn’t gotten the chance to work with him, and I’m glad I was able to. Krav maga is really just a collection of other empty-hand martial arts.